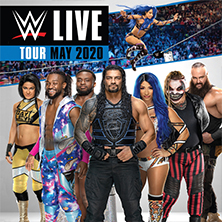 Eventim is the place to look for WWE Live tickets and tour dates.

To be the first to hear when more WWE Live tickets go on sale you can sign up to the Eventim Ticket Alarm below.

Eventim is also on Facebook, Twitter & Pinterest! Connect for all the info on WWE Live plus the latest concerts & festival line-up information, travel details and loads more! Show more

You bought tickets for WWE Live but don't have time to go? No problem: with fanSALE you can simply, quickly and securely sell your admission tickets through Eventim's online ticket market. In this way, you can sell your tickets legally and respectably to true fans, even for sold-out events. Sell tickets

World Wrestling Entertainment, Inc. (WWE) is an American publicly traded, privately controlled entertainment company dealing primarily in professional wrestling, with major revenue sources also coming from film, music, product licensing, and direct product sales. Founded by Jess McMahon and Toots Mondt in 1952, it is currently the largest professional wrestling promotion in the world, reaching 13 million viewers in the U.S. and broadcasting its shows to more than 145 countries. Like other professional wrestling promotions, WWE's shows do not feature legitimate sporting contests. Instead, its programs feature storyline-driven combat sport matches with predetermined outcomes and fighting maneuvers that are worked, all promoted as legitimate bouts.