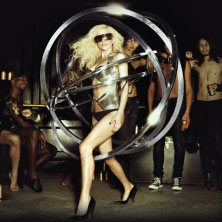 5.0 stars, from 2 fan reports on www.eventim.co.uk
Grammy and Golden Globe winner and Academy Award nominated Lady Gaga is a one-of-a kind artist and performer. She has amassed an outstanding 30 million global album sales and 150 million single sales, making her one of the best-selling musicians of all time. Her fifth studio album Joanne was recently released and debuted at number one on the Billboard Top 200, marking her 4th consecutive number one album - the first female to do so in the 2010s.

Eventim is the place to find Lady Gaga tickets and tour dates.

To be the first to hear when more Lady Gaga tickets go on sale you can sign up to the Eventim Ticket Alarm below.

We are also on Facebook, Twitter & Google+. Connect for all the info on Lady Gaga plus the latest concerts, festival line-ups, travel details and loads more. Show more

You bought tickets for Lady Gaga but don't have time to go? No problem: with fanSALE you can simply, quickly and securely sell your admission tickets through Eventim's online ticket market. In this way, you can sell your tickets legally and respectably to true fans, even for sold-out events. Sell tickets

One of the most infamous and recognisable artists of the moment, Lady Gaga has had phenomenal success worldwide with her albums The Fame (2008), The Fame Monster (2009), Born This Way (2011) & Artpop (2013) as well as achieving critical acclaim for her spectacular live shows and performances. She attracts a lot of attention with her controversial outfits, TV appearances and lyrics.

Gaga hasn’t always been a Lady, though: she was born Stefani Joanne Angelina Germanotta on March 28 1986 in New York City. Having learned the piano by ear at age four, she wrote her first piano ballad when she was 13 and was performing at open mic nights in clubs on New York’s Lower East Side by the time she was 14. When she was 17, she gained a place at New York University’s Tisch School of the Arts with early admission to study music. She left after the first year to concentrate on her musical career, allegedly with support from her father who agreed to pay her rent for a year under the condition she would return to the University if it didn’t work out.

She was soon signed to Streamline Records, a branch of Interscope Records. Before her own commercial success, she wrote songs for fellow label acts like the Pussycat Dolls, before being ‘discovered’ by the R&B artist Akon who recognised her talent and signed her to his own label: thus, Lady Gaga was born. She collaborated with producer/songwriter RedOne on her album The Fame and came up with breakthrough hit Just Dance and follow-up single Poker Face, which both hit the no1 slot in the UK chart.

Since these massive dance hits, she’s had more and more success, most recently collaborating with Beyoncé on number one single Telephone, which had one of the most anticipated videos since Michael Jackson’s Thriller. Writing all of her own lyrics and melodies, and combing fashion, art and technology, her theatrical live shows are a vital part of the Lady Gaga experience. Be the first to know when Lady Gaga tickets are available by signing up to our Ticket Alarm.
Show more