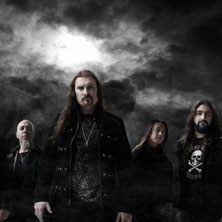 Dream Theater continue to defy popular trends and fickle public taste and stick to what they know best. With a strong fanbase the world over, their unique brand of prog-metal continues to thrill - even after twenty years in the business.

Eventim is the place to look for Dream Theater tickets and tour dates.

To be the first to hear when more Dream Theater tickets go on sale you can sign up to the Eventim Ticket Alarm below.

Eventim is also on Facebook, Twitter & Instagram! Connect for all the info on Dream Theater plus the latest concerts & festival line-up information, travel details and loads more! Show more

You bought tickets for Dream Theater but don't have time to go? No problem: with fanSALE you can simply, quickly and securely sell your admission tickets through Eventim's online ticket market. In this way, you can sell your tickets legally and respectably to true fans, even for sold-out events. Sell tickets

Not only has the five-piece resolutely defied both popular trends and fickle public tastes throughout its career, but Dream Theater's sound and approach is more vibrant, powerful and wide-ranging than ever. Octavarium, produced by the longtime tandem of Portnoy and guitarist John Petrucci, and mixed by Michael Brauer, encompasses the many varieties of heavy, epic, complex rock that has drawn legions of fans to the band's monumental catalog of releases and dynamic, marathon live shows.

"We had two goals this time," explains Portnoy about the band's focused-like-a- laser approach. "The first goal was a reaction to our last album, Train Of Thought (2003), which was intentionally very, very dark and heavy from start to finish. It was definitely the heaviest album we ever made. So when it came time to make this record, we knew we didn't want to do that again. We wanted to go back to a more traditional Dream Theater style, which is a variety of everything. We still have heavy songs, but also have some lighter songs, some epic, progressive songs -- it's more of a balance."

Portnoy adds that the group's second goal was to challenge themselves as songwriters by composing shorter pieces than the band is famous for. "Our last three or four albums, almost every song was very long. I mean, we've always had long songs our whole career, but -- we kind of did that formula to death. So we wanted to challenge ourselves this time to try and write shorter songs. For most bands, it's a challenge to write a long song, but to us, the challenge is to go the other way. There are three or four songs on the album that are very short and concise, but are still Dream Theater."

Indeed, tunes such as "I Walk Beside You" and "The Answer Lies Within" clock in at five minutes or under -- largely unexplored territory for a band known for "double digit" masterpieces like "A Change Of Seasons" and "Metropolis." But what's even more surprising about those two new tracks -- both highlights of Octavarium -- is the diversity of material they represent. "Songs like those are kind of new for Dream Theater," says Portnoy. "There's almost a Coldplay or U2 influence. It's something that we've always had and tried to tap into, but I don't think we've ever truly nailed it as strongly as we did with these songs. And then you have songs like 'Panic Attack' and 'The Root Of All Evil' which are so dark and heavy and progressive and technical, and then something like 'Octavarium' and 'Sacrificed Sons,' which are true epics."

The latter two cuts both feature an orchestra, something the band has never utilized before, while the 24-minute title cut is sure to become one of the band's signature pieces. "I think it's one of the best things we've ever written, because it encompasses a little bit of everything that Dream Theater is about in one statement," says Portnoy proudly. "I think most of our fans' favorite songs from our catalog tend to be those type of songs."

That catalog extends back to 1989, when Dream Theater released its debut album, When Dream And Day Unite. The group has formed several years earlier, in September of 1985, when Berklee School of Music students Portnoy, John Myung and John Petrucci decided to start a band together. Originally known as Majesty, the fledgling act recruited keyboardist Kevin Moore and singer Chris Collins into the fold. Collins eventually left, replaced by Charlie Dominici, while another band forced them to drop the Majesty moniker in favor of Dream Theater, named after a demolished California cinema.

When Dream And Day Unite made an immediate impact on the underground progressive rock scene, but Dream Theater wanted to push further. Replacing Dominici with James LaBrie, the group signed to Atco (later absorbed by Atlantic) and recorded 1992's groundbreaking Images And Words. Featuring the hit, "Pull Me Under," the album introduced Dream Theater to hordes of new fans that continue to support the band to this day.

Many more albums followed, including 1994's Awake, 1997's Falling Into Infinity and 1999's Scenes From A Memory. At the same time, Kevin Moore gave way to first Derek Sherinian, then Jordan Rudess. Personnel changes, label turnover, and the ill-timed release of 2001's Live Scenes From New York -- which arrived on September 11th, 2001, with cover art featuring a New York skyline against a backdrop of flames -- roiled the group but never truly deflected it from its musical path. "The biggest reason we've been able to endure that is our devoted fan base," says Mike Portnoy. "Our fans are as big a part of the story as we or our music is. They're the reason that we're able to keep a major label deal and go and play sheds and large theatres and stuff like that without mainstream exposure. It's due to this incredible fan base that stands by us through thick and thin from year to year."

And now that fan base is about to be rewarded once again with the June 7th release of Octavarium. The last album to ever be recorded at New York's legendary Hit Factory before it closed its doors for good in March of 2005, this record is sure to please every single diehard Dream Theater fan out there, and will continue to draw new ones to the band's skillful medley of heavy metallic power, delicate melodicism, and brilliant, literally award-winning musicianship. "There's always gonna be an audience for musicians and artists and people who actually want to create something that's valid and unique," concludes Portnoy. "The rock stardom thing and being on MTV and selling millions of records and being part of a trend has never been interesting to us. We're just five musicians that like to play and write together, and luckily there's this devoted audience that's been behind us all this time." Show more