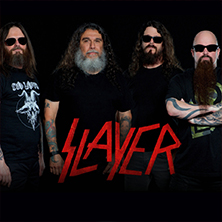 Welcome to the fanSALE artists page of Slayer! fanSALE is the secure ticket market where tickets are bought and sold from fan to fan. Don't miss out on Slayer live. Even for events that are already sold out, there are good chances of getting hold of the best tickets quickly and easily on fanSALE. There are also lots of last-minute deals on fanSALE for tickets for concerts and football. It's worth visiting us regularly for current tour dates and ticket offers, or setting up a search agent. Secure your admission tickets for Slayer now! Show more

You bought tickets for Slayer but don't have time to go? No problem: with fanSALE you can simply, quickly and securely sell your admission tickets through Eventim's online ticket market. In this way, you can sell your tickets legally and respectably to true fans, even for sold-out events. Sell tickets

Slayer tickets at Eventim.co.uk - your link to everything Slayer - concerts, tours, tickets, news and reviews.

Known as a thrash metal band, Slayer have gained a worldwide following due in part to the intricate, tremolo guitar licks by Jeff Hanneman and Kerry King; the incredibly fast and aggressive drumming by Dave Lombardo; and push-the-envelope lyrics by lead singer Tom Araya - not to mention their cover art, which has been banned at various times. Through all this the band have released 11 studio albums and have toured numerous times. Due to the band’s large and passionate following, Slayer tickets enjoy steady sales.

Inspired by the likes of Metallica, Anthrax and Megadeth, the band formed in 1981 but rose to international stardom in 1986 with their album, Hell Awaits, which won many Best Album awards. Dave Lombardo was awarded Best Drummer by Metal Forces magazine.

Slayer performed their first world tour in 1995 and their album sales increased from that point onwards. Their songs have been featured in films such as 1997’s Spawn. Slayer were featured band at the 1998 Ozzfest. In 2001 the band released God Hates Us All, which gained them their first Grammy nomination. A European Slayer tour followed, and even with delays and cancellations due to the September 11 tragedy sales were good and their fan base grew in Europe.

For the next three years, the band performed all over the world, though primarily in Europe and the United States. In 2006 the band released Christ Illusion, which debuted at number five on the Billboard charts, and would eventually become Slayer’s highest charting album. The band began to attract a more mainstream audience, appearing on the Jimmy Kimmel Live! television show in the United States and at US Air Force bases in Germany.

Their hardcore, no-holds-barred style has made Slayer a favourite with fans who recognize true musical prowess from the band members and lyrics that push the boundaries of acceptability. With steady Slayer ticket sales and music downloads, their concerts remain packed. Get the best Slayer tickets that you can and let the party begin!