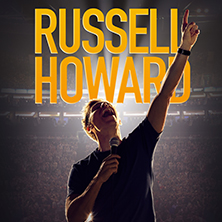 4.9 stars, from 15 fan reports on www.eventim.co.uk
Russell Howard is an award-winning stand-up comedian, television host and panellist best known for his BBC2 show, ‘Russell Howard’s Good News’ and as a former star of popular BBC2 topical show, ‘Mock The Week’.

After the global success of Netflix special Recalibrate, Sky One’s hit The Russell Howard Hour which spawned over 109 million views worldwide on social media and 2017 international record-breaking sell-out tour Round The World, Russell Howard returns to the live stage with his third and largest world tour to date, Respite and heading across the UK in 2019:

Eventim is the place to look for Russell Howard tickets and tour dates.

To be the first to hear when more Russell Howard tickets go on sale you can sign up to the Eventim Ticket Alarm below.

Eventim is also on Facebook, Twitter & Pinterest! Connect for all the info on Russell Howard plus the latest concerts & festival line-up information, travel details and loads more! Show more

You bought tickets for Russell Howard but don't have time to go? No problem: with fanSALE you can simply, quickly and securely sell your admission tickets through Eventim's online ticket market. In this way, you can sell your tickets legally and respectably to true fans, even for sold-out events. Sell tickets

Russell Howard burst onto the comedy scene in 2004 when he was commissioned to write and perform in the BBC Radio series, The Milk Run. He had already built up a reputation as a likeable comedian on the circuit, with an easy laid-back style. After the success of The Milk Run, which he co-presented with Jon Richardson, he took over the Sunday morning Russell Brand slot on BBC 6. It was renamed the Russell Howard Show, and since then he has appeared regularly on BBC2’s Mock the Week, and Radio 4’s Banter.

Although TV and radio gave him his big break Russell still prefers the immediacy of a live audience, so he tours regularly. His chatty style endears him to his fans, which is why Russell Howard tickets always sell out. He has created a relationship with his audience, who are essential to his act. “I need people out there to feed on,” he says.

His stage work has made him one of the country’s most exciting talents, and in 2005 his sell-out show, Wandering, at the Edinburgh Fringe won him a 10 minute slot on the Paramount Comedy show, Edinburgh and Beyond. More importantly, it won him the prestigious IF Comedy Award (formerly the Perrier Award).

Other gigs followed on the success of this work – Adventures (2007/8), Dingledodies (2008/9) and Big Rooms and Belly Laughs (2009). Thousands of Russell Howard tickets have been sold to these shows.

Russell’s activities aren’t confined to the stage; he took part in a gruelling challenge for the 2010 Sport Relief Campaign when he joined a team of comedy celebs recruited by David Walliams to cycle from John O’ Groats to Land’s End. This was just one of many charity events he has appeared at since his rise to fame.