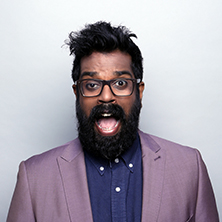 Romesh Ranganathan is a Sri Lankan British comedian who actually began his career as a maths teacher before realising that comedy was his calling in 2010.

Ranganathan soon found success with his festival debut show ‘Rom Com’, which saw him receive a nomination for the Best Newcomer Award 2013, with his second venturing, ‘Rom Wasn’t Built In A Day’, being nominated for the Edinburgh Fosters Best Show Award the following year.

Ranganathan has since become something of a household name, appearing on shows such as BBC’s ‘Live At The Apollo’, ‘Mock The Week’, ‘Russel Howard’s Good News’ and ‘Sunday Night At The Palladium’, to name but a few.

Eventim is the place to look for Romesh Ranganathan tickets and tour dates.

To be the first to hear when more Romesh Ranganathan tickets go on sale you can sign up to the Eventim Ticket Alarm below.

Eventim is also on Facebook, Twitter & Google+! Connect for all the info on Romesh Ranganathan plus the latest concerts & festival line-up information, travel details and loads more! Show more

You bought tickets for Romesh Ranganathan but don't have time to go? No problem: with fanSALE you can simply, quickly and securely sell your admission tickets through Eventim's online ticket market. In this way, you can sell your tickets legally and respectably to true fans, even for sold-out events. Sell tickets