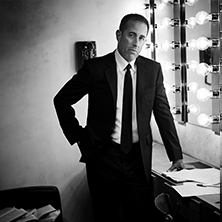 5.0 stars, from 2 fan reports on www.eventim.co.uk
Jerry Seinfeld is an American stand-up comedian, actor and writer from Brooklyn, New York. He is a household name in America, due to his sitcom Seinfeld, in which he played a semi-fictional version of himself. As well as working with Larry David on Seinfeld, he has ventured into writing and producing film (Bee Movie), directing plays and writing books. His 1993 book Seinlanguage went to number one on the New York Times bestseller list, and is primarily an adaptation of his stand-up material.

You bought tickets for Jerry Seinfeld but don't have time to go? No problem: with fanSALE you can simply, quickly and securely sell your admission tickets through Eventim's online ticket market. In this way, you can sell your tickets legally and respectably to true fans, even for sold-out events. Sell tickets