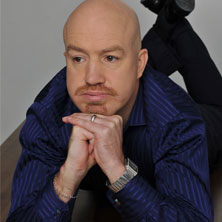 Andy Parsons is an English comedian and writer from Cornwall. He is a regular face on panel shows such as Mock the Week, and he’s written and presented nine seasons of Parsons and Naylor’s Pull-Out Sections for BBC Radio 2 with his long-time comedy partner, Henry Naylor. He regularly performs solo shows at comedy festivals as well as The Comedy Store in London, and has appeared on They Think It’s All Over and QI. He toured in 2009 with a show titled Andy Parsons: Citizens!, which was recorded at the Lyric Theatre and released on DVD in 2009.

You bought tickets for Andy Parsons but don't have time to go? No problem: with fanSALE you can simply, quickly and securely sell your admission tickets through Eventim's online ticket market. In this way, you can sell your tickets legally and respectably to true fans, even for sold-out events. Sell tickets