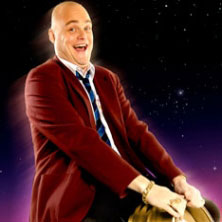 Al Murray is a contemporary comedian possibly best known for his embodiment of his character The Pub Landlord, which is a stereotypical portrayal of a xenophobic British nationalist.

He has been voted one of the 50 Funniest Acts in British Comedy by the Observer, as well as appearing at number 16 in Channel 4's Hundred Greatest Stand-ups. He is a graduate of Oxford University where he read history, and this was where he first started dabbling in comedy by performing in The Oxford Revue along with Stewart Lee.

Eventim is the place to look for Al Murray tickets and tour dates.

To be the first to hear when more Al Murray tickets go on sale you can sign up to the Eventim Ticket Alarm below.

Eventim is also on Facebook, Twitter & Instagram! Connect for all the info on Al Murray plus the latest concerts & festival line-up information, travel details and loads more! Show more

You bought tickets for Al Murray but don't have time to go? No problem: with fanSALE you can simply, quickly and securely sell your admission tickets through Eventim's online ticket market. In this way, you can sell your tickets legally and respectably to true fans, even for sold-out events. Sell tickets

The stand-up comedian Al Murray is best known for his portrayal of the xenophobic Pub Landlord, an act which has won him great acclaim. In his creation of The Pub Landlord he encapsulates the lower middle class British nationalist, with an in-built dislike of anything ‘foreign’. His xenophobia is especially reserved for the French and the Germans. He also portrays a misogynistic edge to the character, with phrases such as “pint for the fella…glass of white wine, fruit- based drink for the lady,”, and “I was never confused,” as reference to homophobia. By way of contradiction, the Pub Landlord is also a self confessed Queen fan.

The Pub Landlord made his first appearance in 1994 when Murray toured as the support act for Harry Hill. It was during this tour that Al developed the character; this was a complete break away from his previous act which was based on impressions and sound effects. From then on the outrageous Pub Landlord would be his signature act, and would go on to help Al Murray tickets sell out arenas.


In 2002 the Pub Landlord made a theatre appearance in My Gaff, My Rules, and this role won him a short listing for the Laurence Olivier Award. He also won a British Comedy Award for his chat show Al Murray’s Happy Hour, with further Al Murray tickets selling as word spread.

Al Murray is a multifaceted talent, happy to expand his work away from comedy. In 2004 he made an appearance as a contestant on Gordon Ramsey’s reality TV show Hell’s Kitchen and also took part in the 2005 reality show Comic Relief does Fame Academy. By complete contrast Murray presented Al Murray’s Road to Berlin on the Discovery Channel. This took him on a journey from the Normandy beaches to Berlin, tracing the route of the Allied forces in World War Two.

Al Murray is a patron of the Cambodian Children’s Charity (known as Camkids) – a development and aid charity for children still suffering the effects of the years of unrest in Cambodia.