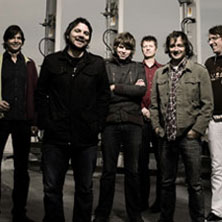 Wilco’s music has been inspired by a wide variety of artists and styles, including Bill Fay and Television, and has in turn influenced music by The National and Cherry Ghost. The band continued in the alternative country of Uncle Tupelo on its debut album A.M. (1995), but has since introduced more experimental aspects to their music.

If you're looking for tickets and UK tour dates to see Wilco live, Eventim is the place to be!

To be the first to hear when more Wilco tickets for live UK dates go on sale you can sign up to the Eventim Ticket Alarm below.

Eventim is also on Facebook, Twitter & Google+! Connect for all the info on Wilco plus the latest concerts & festival line-up information, travel details and loads more! Show more

You bought tickets for Wilco but don't have time to go? No problem: with fanSALE you can simply, quickly and securely sell your admission tickets through Eventim's online ticket market. In this way, you can sell your tickets legally and respectably to true fans, even for sold-out events. Sell tickets