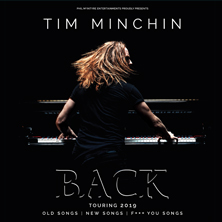 Tim Minchin is a British born Australian comedian, actor and musician. He is best known for his musical comedy, and has recently toured with a full orchestra. He sees himself primarily as a musician and songwriter rather than a comedian, with his lyrical content ranging from social satire to sex fetishes! He has won various awards including the Edinburgh Festival Fringe Perrier Comedy Award for Best Newcomer in 2005, and most recently the 2010 Chortle Award for Best Music or Variety Act.

You bought tickets for Tim Minchin but don't have time to go? No problem: with fanSALE you can simply, quickly and securely sell your admission tickets through Eventim's online ticket market. In this way, you can sell your tickets legally and respectably to true fans, even for sold-out events. Sell tickets