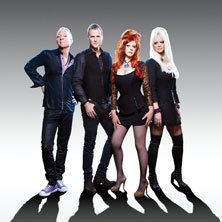 It is well known that the B-52s are the World’s Greatest Party Band. And thirty years and over twenty million albums into their career, there can be no doubt as to why The B-52s remain among the most beloved rock stars ever. Any mystery concerning the longevity and ongoing appeal of the band is immediately solved when exposed to a unique B-52s concert experience.

Eventim is the place to look for The B52's tickets and tour dates.

To be the first to hear when more The B52's tickets go on sale you can sign up to the Eventim Ticket Alarm below.

Eventim is also on Facebook, Twitter & Pinterest! Connect for all the info on The B52's plus the latest concerts & festival line-up information, travel details and loads more! Show more

You bought tickets for The B52's but don't have time to go? No problem: with fanSALE you can simply, quickly and securely sell your admission tickets through Eventim's online ticket market. In this way, you can sell your tickets legally and respectably to true fans, even for sold-out events. Sell tickets

It is well known that the B-52s are the World’s Greatest Party Band. And thirty years and over twenty million albums into their career, there can be no doubt as to why The B-52s remain among the most beloved rock stars ever. Any mystery concerning the longevity and ongoing appeal of the band is immediately solved when exposed to a unique B-52s concert experience. From the timeless gems of "Rock Lobster," "Planet Claire" and "Private Idaho" to the more recent classics “Channel Z," "Love Shack" and "Roam", the B-52s’ unforgettable dance-rock tunes start a party every time their music begins.

Formed on an October night in 1976 following drinks at an Athens, GA, Chinese restaurant, the band played their first gig at a friend's house on Valentine's Day 1977. Naming themselves after Southern slang for exaggerated 'bouffant" hairdos, the newly-christened B-52s (Fred Schneider, Kate Pierson, Keith Strickland, Cindy Wilson and Ricky Wilson) began weekend road trips to New York City for gigs at CBGB's and a handful of other venues. Before long, their thrift store aesthetic and genre-defying songs were the talk of the post-punk underground. A record deal soon followed and their self-titled debut disc, produced by Chris Blackwell, sold more than 500,000 copies on the strength of their first singles, the garage rock party classic "Rock Lobster," and "52 Girls." The B-52s began to attract fans far beyond the punk clubs of the Lower East Side — galvanizing the pop world with their 'stream-of-consciousness' approach to songwriting and outrageous performance. They had clearly tapped into a growing audience for new music that was much larger than anyone could have anticipated. "We always appealed to people outside the mainstream," says Kate Pierson, "and I think more people feel they're outside the mainstream these days."

With the release of their second studio effort, Wild Planet (1980), the B-52s and co-producer Rhett Davies proved their success was no fluke with hits with "Private Idaho," "Give Me Back My Man" and "Strobe Light." In just two albums, the B-52s created a lexicon of songs, styles, phrases and images which would set the standard for the development of the 'alternative music scene' for the next decade. The success of Mesopotamia, produced by David Byrne (1982), and Whammy! (1983) positioned the B-52s as MTV regulars as well as alternative radio staples.

At the time of their greatest achievements, however, they suffered their greatest tragedy — the death of guitarist Ricky Wilson from AIDS. "He really had a vision…," said sister Cindy Wilson. "He was one of the strongest elements of the B-52s from the beginning." Ricky Wilson's passing in 1985 came just after the sessions for Bouncing Off The Satellites (1986). The album, dedicated to Wilson, had taken nearly three years to complete but was worth the wait, serving up the fan favorites "Summer of Love" and "Wig."

As a period of mourning, Keith, switching from drums to guitar, gradually resumed writing music for a new album. Working together on vocal melodies, lyrics and arrangements for the new tracks, Keith, Kate, Fred and Cindy re-emerged with the Don Was/Nile Rodgers co-produced Cosmic Thing (1989). The album proved to be the greatest commercial achievement for the group, and its success propelled the band to international superstars.

Cosmic Thing soared to the top of the Billboard Album chart, sold five million copies and yielded their first-ever Hot 10 hits — "Love Shack" and "Roam" and a Top 40 hit with "Deadbeat Club." The B-52s advanced their reputation as the greatest party band on the planet to a whole new generation of music fans. They played to sold-out audiences worldwide on a tour that would last more than 18 months, including an Earth Day gig before nearly 750,000 people in New York City's Central Park.

Soon after, Cindy Wilson amicably departed. "I'd been a B-52 for a long time, and it just felt like time for a change," said Cindy. Before long, Wilson had successfully completed her first solo project — a baby girl. Meanwhile, Kate collaborated with other artists, including Athens compatriots R.E.M., for whom she guest-starred on their 1991 album Out of Time. She also scored a hit with fellow CBGB's alum Iggy Pop on his lovelorn duet "Candy." Fred, meanwhile started work on a solo project, Just Fred (1996), with producer Steve Albini, his second solo project since the release of 1984’s Fred Schneider and the Shake Society.

As a trio, Fred, Keith and Kate re-enlisted the tag team of Was and Rodgers to produce the energetic Good Stuff (1992). With it’s popular title cut and concert favorite "Is That You Mo-Dean?," Good Stuff is more than just a worthy follow-up to Cosmic Thing: the album stands as the group's most overtly political album. "We're out there to entertain people," said Fred, "but it's great to get people thinking and dancing at the same time."

Reuniting permanently with Cindy, the B-52s wrote and recorded two new tracks that fit perfectly into Time Capsule, a 1998 stellar collection of hits. The first single from the Best Of collection, "Debbie" is a metaphorical tribute to band friend and supporter Debbie Harry and the whole CBGB's scene of the late '70s.

With the release of the two-disc collection Nude on the Moon: the B-52s Anthology (2002), the B-52s took much-deserved credit for a body of work that is unique, beloved and timeless in its own way. The B-52s influence cuts a wide path through much of so-called 'modern rock' — from the low-fi efforts of nouveau garage bands to the retro-hip of ultra-lounge, to the very core of dance music itself. "We just did our own thing, which was a combination of rock 'n 'roll, funk, and Fellini, and game show host, and corn, and mysticism," says Fred. It is indeed all these things (and much more).

In 2008 the B-52s released their first new album in 16 years, the aptly titled Funplex. With its primal guitar hooks, driving drums and the B-52s' unmistakable vocal style, Funplex is instantly recognizable as quintessential and contemporary B-52s. Newsweek Magazine declared, “Like a sonic shot of vitamin B12, the dance floor beats, fuzzy guitar riffs and happy, shiny lyrics keep the energy going.”

As the B-52s continue to take their party-music revolution into the 21st century they show no signs of slowing down, serving up their own unique blend of music and showmanship to millions of fans around the world.

Sterling Campbell - drums. Sterling has worked with numerous high-profile acts. He rose to attention in 1986, touring with Cyndi Lauper on her her True Colors World Tour. Sterling was a member of Duran Duran from 1989 to 1991. He became a member of Soul Asylum in 1995, playing with them until 1998. He began recording with David Bowie in 1991 and toured with him from 2000-2004. Sterling joined the B-52s' touring band in 2007.

Paul Gordon - keyboards/guitar. Paul's career has included live performance, production, and composition for television and film. The many acts he has worked with include Goo Goo Dolls, New Radicals, Natasha Bedingfield, Prince and Lisa Marie Presley. Music he has written for television and film include Themes for Digimon (Digital Monsters), Transformers (Robots in Disguise), Wild Force Power Rangers, Huff (Showtime) as well as the many songs for major motion pictures. Paul joined the B-52s' touring band in 2007.

Tracy Wormworth - bass. Tracy played bass in 1980's group The Waitresses. She has performed and toured with Sting, Bette Midler, Roberta Flack, Ruth Brown, Barry Manilow, Phyllis Hyman and Joan Osborne and was a member of the house band on The Rosie O'Donnell Show. She has recorded with The B's, The Waitresses, Lena Horne, David Lee Roth, Regina Carter, Joan Osborne and numerous others. Tracy has been performing on and off with the B-52s since 1990. Show more