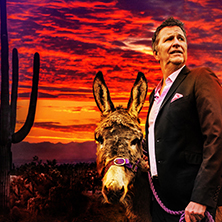 Stewart Francis is a headlining comedian with wicked, deadpan delivery and zingy one-liners. Well-known in Canada, his one-man act has become so popular he is taking it on the road to the UK in 2010. Stewart Francis tickets are difficult to get in Canada - not to mention being very expensive - and the UK tour is a fantastic opportunity to get Stewart Francis tickets. Called “a brilliant comic brain” by The Guardian, his humour has been described as “drier than a Manhattan martini” by Scotland On Sunday. You won’t be disappointed!
Eventim is the place to look for Artist tickets and tour dates. Sign up to the Artist Ticket Alarm to be notified of future Artist concerts and tours. Show more

You bought tickets for Stewart Francis but don't have time to go? No problem: with fanSALE you can simply, quickly and securely sell your admission tickets through Eventim's online ticket market. In this way, you can sell your tickets legally and respectably to true fans, even for sold-out events. Sell tickets

The Guardian has called him “a brilliant comic brain”, and Scotland On Sunday described his humour as “drier than a Manhattan martini”. He writes his own material, most of it coming from daily life or situations he has encountered. Besides writing his own content, he has also written for The Tonight Show with Jay Leno, Puppets Who Kill and The Gemini Awards. His work has also been featured in The Hockey News.

On television he has been a guest several times on The Late Late Show with Craig Ferguson, and the trivia game show You Bet Your Ass. In the UK he has made appearances on The Comedy Store, Mock The Week, and Michael McIntryre’s Comedy Roadshow.

He has also performed to rousing reviews and crowds at venues such as Edinburgh’s Fringe Festival, the Belfast Comedy Festival and the Smirnoff Comedy Festival in South Africa. He left them laughing in the aisles at all of these shows.

Now that he’s becoming better known, Stewart Francis tickets sell faster than ever. His European tour includes venues such as Birmingham and Brighton (where he will be supporting Ricky Gervais), Oslo, Chiswick and Ruslip. In London, Stewart Francis will perform his hilarious show, Tour de Francis, at the Bloomsbury Theatre, with The Tour continuing on to other parts of England later in the year.

His show is bitingly funny and his timing is absolutely perfect. If you like true-to-life humour delivered to you deadpan, and jokes that make you think for just a second before you laugh out loud, Stewart Francis is your man. Find Stewart Francis tickets to the show closest to you, or travel a bit and treat yourself to a weekend away from home.