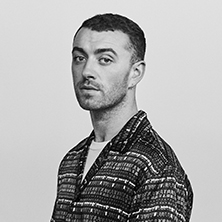 4.3 stars, from 10 fan reports on www.eventim.co.uk
Sam Smith won the BBC Sound of 2014 poll. He gave dance duo Disclosure their first chart hit, on the sinewy Latch; while La La La, his hook-up with Naughty Boy, landed at number one summer 2013.

Sam Smith has also released a series of well-judged solo songs online – showcasing his extraordinary voice, which he honed singing along to Aretha Franklin and Whitney Houston in his family’s car.

Eventim is the place to look for Sam Smith tickets and tour dates.

To be the first to hear when more Sam Smith tickets go on sale you can sign up to the Eventim Ticket Alarm below.

Eventim is also on Facebook, Twitter & Instagram! Connect for all the info on Sam Smith plus the latest concerts & festival line-up information, travel details and loads more! Show more

You bought tickets for Sam Smith but don't have time to go? No problem: with fanSALE you can simply, quickly and securely sell your admission tickets through Eventim's online ticket market. In this way, you can sell your tickets legally and respectably to true fans, even for sold-out events. Sell tickets

Sam Smith rose to fame in October 2012 when he featured on Disclosure's breakthrough single "Latch", which peaked at number eleven on the UK chart. His subsequent feature—on Naughty Boy's "La La La"—earned him his first number-one single in May 2013.

He is scheduled to release his debut studio album, In the Lonely Hour, on 26 May 2014 via Capitol Records. The lead single, "Lay Me Down", was released prior to "La La La". The second single, "Money on My Mind", was released on 16 February.

He is the cousin of singer Lily Allen and actor Alfie Allen.