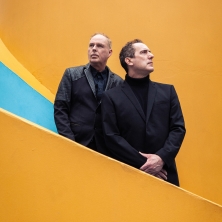 4.8 stars, from 5 fan reports on www.eventim.co.uk
The Liverpool music scene of the late 1970's was an exciting and dynamic place to be. Everyone was either in a band, or were forming a band. In the midst of this activity was Eric's Club, which would later form bands such as Echo & The Bunnymen and Frankie Goes To Hollywood. So it was apt that Eric's was the venue of choice for the debut performance of Orchestral Manoeuvres In The Dark (OMD) in October 1978.

If you're looking for tickets and UK tour dates to seeOMD live, Eventim is the place to be!

To be the first to hear when more OMD tickets for live UK dates go on sale you can sign up to the Eventim Ticket Alarm below.

Eventim is also on Facebook, Twitter & Google+! Connect for all the info on OMD plus the latest concerts & festival line-up information, travel details and loads more! Show more

You bought tickets for OMD but don't have time to go? No problem: with fanSALE you can simply, quickly and securely sell your admission tickets through Eventim's online ticket market. In this way, you can sell your tickets legally and respectably to true fans, even for sold-out events. Sell tickets