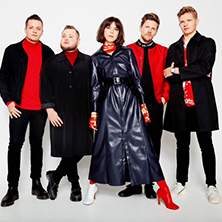 Of Monsters And Men

Of Monsters and Men are an indie folk band which formed in 2010 in Reykjavík, Iceland.

Eventim is the place to look for Of Monsters and Men tickets and tour dates.

To be the first to hear when more Of Monsters and Men tickets go on sale you can sign up to the Eventim Ticket Alarm below.

Eventim is also on Facebook, Twitter & Google+! Connect for all the info on Of Monsters and Men plus the latest concerts & festival line-up information, travel details and loads more! Show more

You bought tickets for Of Monsters And Men but don't have time to go? No problem: with fanSALE you can simply, quickly and securely sell your admission tickets through Eventim's online ticket market. In this way, you can sell your tickets legally and respectably to true fans, even for sold-out events. Sell tickets

Of Monsters and Men are an indie folk band which formed in 2010 in Reykjavík, Iceland. The band consists of Nanna Bryndís Hilmarsdóttir (vocals, guitar), Ragnar Þórhallsson (vocals, guitar), Brynjar Leifsson (guitar), Kristján Páll Kristjánsson (bass), Árni Guðjónsson (keyboards, accordion) and Arnar Rósenkranz Hilmarsson (drums). The band released their debut album “My Head Is an Animal” in September 2011. The album’s single “Little Talks” peaked at #1 in Iceland, and became successful in the United States after extensive airplay on Philadelphia rock station WRFF and subsequent word of mouth. In April 2012 the tune became their first entry on the US singles chart, when it entered the Billboard Hot 100 at #92. Show more