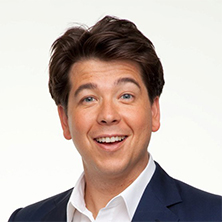 5.0 stars, from 3 fan reports on www.eventim.co.uk
Since his big break in 2006 at the Royal Variety Performance, Michael McIntyre has become one of the most successful comedians to date, with his debut DVD, Live and Laughing, becoming the fastest selling of all time in 2008.

Michael’s Showtime tour the biggest selling comedy tour in the world in 2012 and saw him playing to over 700,000 people which included a ten-night residency at London’s O2 Arena.

In 2011 Michael was appeared as a judge on Britain’s Got Talent and and the award-winning comedian has also been a success while trying his hand at presenting on The Michael McIntyre Chat Show and Michael McIntyre’s Comedy Roadshow.

Eventim is the place to look for Michael McIntyre tickets and tour dates.

To be the first to hear when more Michael McIntyre tickets go on sale you can sign up to the Eventim Ticket Alarm below.

Eventim is also on Facebook, Twitter & Instagram! Connect for all the info on Michael McIntyre plus the latest concerts & festival line-up information, travel details and loads more! Show more

You bought tickets for Michael McIntyre but don't have time to go? No problem: with fanSALE you can simply, quickly and securely sell your admission tickets through Eventim's online ticket market. In this way, you can sell your tickets legally and respectably to true fans, even for sold-out events. Sell tickets

Michael's big break came at the Royal Variety Performance in 2006.

His debut DVD, Live and Laughing, was the fastest selling of all time, only to be eclipsed by his second, Hello Wembley, that sold over 1.4 million copies and was the 2009 Christmas number one.

He now hosts his own BAFTA nominated BBC 1 series, Michael Mcintyre's Comedy Roadshow, and has won British Comedy Awards for Best Live Stand-up in 2009 and Best Male TV Comic in 2010.

In 2010 he became the youngest ever host of The Royal Variety Performance and released his bestselling autobiography, Life and Laughing.

In 2011 Michael was a judge on the hit ITV1 show Britain's Got Talent. He also hosted Michael Mcintyre's Christmas Comedy Roadshow on BBC1 Christmas Day which was watched by over 8 million viewers.

2012 continued with a massive tour playing some of the biggest venues UK and Ireland tour. Show more