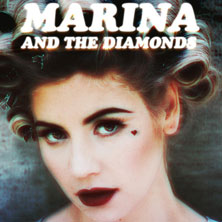 5.0 stars, from 1 fan reports on www.eventim.co.uk
Marina Diamandis, better known as MARINA (formerly Marina and the Diamonds), is a Welsh singer-songwriter of Greek descent. She came second on the BBC Sound of 2010 poll list, pipped to the post by Ellie Goulding. Her single Hollywood propelled her into the charts at number 12, and she has since become ‘one to watch’ for 2010.

If you're looking for tickets and UK tour dates to see Marina live, Eventim is the place to be!

To be the first to hear when more MARINA tickets for live UK dates go on sale you can sign up to the MARINA Ticket Alarm below.

Eventim is also on Facebook, Twitter & Google+! Connect for all the info on MARINA plus the latest concerts & festival line-up information, travel details and loads more! Show more

You bought tickets for MARINA but don't have time to go? No problem: with fanSALE you can simply, quickly and securely sell your admission tickets through Eventim's online ticket market. In this way, you can sell your tickets legally and respectably to true fans, even for sold-out events. Sell tickets

MARINA tickets at Eventim.co.uk - your link to everything MARINA - concerts, tours, tickets, news and reviews.

Marina Diamandis grew up in Wales, but spent some time in Greece with her Greek family. Her Greek father and Welsh mother separated when she was four, but her years in Abergavenny with her mother and older sister, were “stable and reasonably happy”, she says.

She moved to London at the age of 18, with the intention of studying at university. Music was increasingly important in her life, to the detriment of her education as she dropped out of four different universities before ending up in the West End Musical The Lion King. That experience convinced her that the world of stage musicals wasn’t her scene – she wanted to make her own music.

Many imagine that The Diamonds are her backing group; in fact the name refers to Marina’s fans. She explains this on her MySpace page, saying, "I'm Marina. You are the diamonds." Marina and The Diamonds’ musical style is wide ranging – from keyboard-based ballads to more up-tempo new wave-style songs with full band backing. She admits to being influenced in her music by such artists as Elliot Smith, Nirvana, Kate Bush, Dolly Parton, and Madonna.

She began writing her own material and, using a laptop, she produced her first demo recording which was picked up by the New York record company Neon Gold. Marina made her debut with the company in 2009 with the double A-side recording, Obsessions/Mowgli’s Road, followed by the EP Crown Jewels. Mowgli’s Road was re-released in the UK later that year when she signed with 679 Recordings, a subsidiary of the Warner label.

But it’s not just her music that is effervescent, her fashion style is too. She describes her look as “vintage, cheerleader, cartoon”. She achieved her iconoclastic style by sourcing her clothes from designers such as Laura Mackness and Jean-Charles de Castebajac, but she’s not above making her own outfits and browsing charity shops. Her attention to her image has gained her some celebrity in addition to her musical fame, as in May 2010 she designed her own window display for Selfridges as part of their Sound Of Music event.