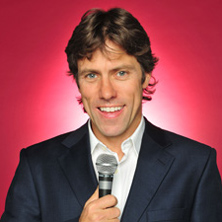 4.7 stars, from 37 fan reports on www.eventim.co.uk
John Bishop is a Liverpudlian stand-up comedian. Jon Bishop is one of the best observational comics on the circuit, seizing on real-life situations for laughs, sharing the minutiae of family life, from his man-waxing to his wife's Spanx underwear.

Eventim is the place to look for John Bishop tickets and tour dates.

To be the first to hear when more John Bishop tickets go on sale you can sign up to the Eventim Ticket Alarm below.

Eventim is also on Facebook, Twitter & Google+! Connect for all the info on John Bishop plus the latest concerts & festival line-up information, travel details and loads more! Show more

You bought tickets for John Bishop but don't have time to go? No problem: with fanSALE you can simply, quickly and securely sell your admission tickets through Eventim's online ticket market. In this way, you can sell your tickets legally and respectably to true fans, even for sold-out events. Sell tickets

John Bishop hails from Liverpool, though he now lives in Manchester with his wife and three sons. His comedy roots are still firmly in Merseyside though, and he remains passionate about the Liverpool Football Club. His early life in Liverpool gives him a lot of material for his show, as he relives his experiences such as playing semi-professional football and working as a nightclub doorman.

As a semi-pro footballer John played for Southport and Hyde United, and the highlight of his footballing career came when he subbed for the Liverpool Legends in the Hillsborough Memorial Game at the Anfield Stadium in 2009.

Stand-up comedy wasn’t John’s first choice of career. He had a high-flying job with a pharmaceutical company which provided him with a good living as he jetted round the globe selling drugs to prevent organ rejection after transplants.

His first public performance in 2000 was quickly followed by a whole series of nominations for comedy awards: he was a finalist in So You Think You’re Funny, the BBC New Comedy Awards, The City Life North–West Comedian of the Year and The Daily Telegraph Open Mic Awards.

Following this great publicity his reputation soared: he became a broadcaster for Radio City 96.7, and has written a play – Happy Families – for Radio 4. When his marriage broke up he re-assessed his life and having had comedy success in a part-time capacity, John handed in his notice and became a full time touring comedian. Since then he hasn’t looked back.

His first Edinburgh Fringe tour was with a show entitled Freefall for which he received mixed reviews. By 2009 though, John was receiving recognition with an Edinburgh Comedy Award Nomination for his show Elvis Has Left The Building, which was a total ticket sell out. The same year he appeared in his first film, Ken Loach’s Route Irish. Will this lead him to a film career? He doesn’t think so, as stand-up is still his big passion.