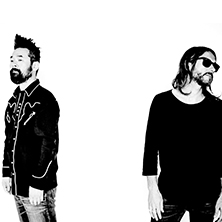 Feeder are an alternative rock band from Newport, in Wales. Eventim is the place to look for Feeder tickets and tour dates.

To be the first to hear when more Feeder tickets go on sale you can sign up to the Eventim Ticket Alarm below.

Eventim is also on Facebook, Twitter & Google+! Connect for all the info on Feeder plus the latest concerts & festival line-up information, travel details and loads more! Show more

You bought tickets for Feeder but don't have time to go? No problem: with fanSALE you can simply, quickly and securely sell your admission tickets through Eventim's online ticket market. In this way, you can sell your tickets legally and respectably to true fans, even for sold-out events. Sell tickets

Feeder are an alternative rock band from Newport, in Wales. The line-up currently consists of Grant Nicholas (guitar, vocals), Taka Hirose (bass) and Karl Brazil (drums). Their first taste of mainstream success came from single Buck Rogers which became their first top ten hit in 2001, and album Echo Park reached number five in the UK chart. They won Kerrang awards for Best British Live Act and Best British Band on the success of this album.

The band were struck by tragedy in 2002 when original drummer Jon Lee committed suicide at his home in Miami. The band kept a low profile for around a year following this; and in this time Nicholas wrote some songs relating to this which formed their fourth album, Comfort in Sound. Skunk Anansie drummer Mark Richardson stepped in as drummer for the band . The change in pace was apparent as the songs gained a new depth and focused on loss, depression and grieving, in contrast to the more light-hearted Echo Park. This album is the band’s best-selling album to date, and was received with widespread critical acclaim.

The band have continued to write and record, with their most recent album, Silent Cry, receiving favourable reviews. In May 2009, it was announced that Richardson was departing to return to his original band (Skunk Anansie), and Brazil joined, playing his first Feeder gig at the 2009 Sonisphere festival. The remaining member s started performing new material undercover as Renegades, reportedly so they could play their new songs without having to play the ‘classic’ Feeder songs they were known for. This enabled them to test the material on an unsuspecting audience - the result was good, and now Feeder tickets are available for their UK tour when they return as the band we know and love!