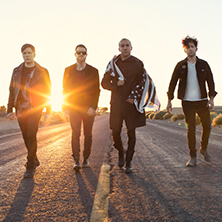 Fall Out Boy are American rockers from Wilmette, Illinois, formed in 2001 and became one of the most successful bands in the noughties with hits such as Dance Dance and Sugar, We’re Going Down.

Their album, American Beauty/American Psycho was released in early 2015 and reached number 1 in the United States.

Eventim is the place to look for Fall Out Boy tickets and tour dates.

To be the first to hear when more Fall Out Boy tickets go on sale you can sign up to the Eventim Ticket Alarm below.

Eventim is also on Facebook, Twitter & Instagram! Connect for all the info on Fall Out Boy plus the latest concerts & festival line-up information, travel details and loads more! Show more

You bought tickets for Fall Out Boy but don't have time to go? No problem: with fanSALE you can simply, quickly and securely sell your admission tickets through Eventim's online ticket market. In this way, you can sell your tickets legally and respectably to true fans, even for sold-out events. Sell tickets

Fall Out Boy rose to the forefront of emo pop in the mid-2000s, selling more than four million albums thanks to the band's tabloid-grabbing bassist, able-voiced frontman, and handful of Top 40 hits. The group's four members first came together in Wilmette, a bedroom community north of Chicago, around 2001. Vocalist/guitarist Patrick Stump, bassist/lyricist Pete Wentz, drummer Andrew Hurley, and guitarist Joe Trohman had all taken part in various bands connected to Chicago's underground hardcore scene. Most notably, Hurley drummed for Racetraitor, the furiously political metalcore outfit whose brief output was both a rallying point and sticking point within the hardcore community. As Fall Out Boy, the quartet used the unbridled intensity of hardcore as a foundation for melody-drenched pop-punk, with a heavy debt to the emo scene. They debuted with a self-released demo in 2001, following it up in May 2002 with a split LP (issued on the Uprising label) that also featured Project Rocket, for which Hurley also drummed. The band remained with the label for the release of a mini-LP, Fall Out Boy's Evening Out with Your Girl, but a bidding war of sorts was already in full swing.

Fall Out Boy eventually signed a deal with Fueled by Ramen, the Florida-based label co-owned by Less Than Jake drummer Vinnie Fiorello, but also received an advance from Island Records to record a proper debut album. The advance came with a right of first refusal for Island on Fall Out Boy's next album, but it also financed the recording of Take This to Your Grave, which occurred at Butch Vig's Smart Studios compound in Madison, Wisconsin, with producer Sean O'Keefe (Lucky Boys Confusion, Motion City Soundtrack) at the helm. Take This to Your Grave appeared in May 2003, and Fall Out Boy earned positive reviews for subsequent gigs at South by Southwest and various tour appearances. Their breakout album, the ambitious From Under the Cork Tree, followed in spring 2005, quickly reaching the Top Ten of Billboard's album chart and spawning two Top Ten hits with "Sugar We're Going Down" and the furiously upbeat "Dance, Dance." The album went double platinum and earned the musicians a Grammy nomination for Best New Artist.


Fall Out Boy's underground star status -- driven by the especially extroverted Wentz, who also gained exposure with his clothing line, his Decaydance record label (an imprint of Fueled by Ramen), and eventually a celebrity relationship with Ashlee Simpson -- had boiled over into the mainstream. They toured extensively, supporting the album with international tours, arena shows, TRL visits, late-night television gigs, and music award shows. Without taking a break, the guys then hunkered down to work on their follow-up record with From Under the Cork Tree producer Neil Avron (and, somewhat surprisingly, Babyface). Infinity on High, whose title was taken from a line in one of Van Gogh's personal letters, appeared in early February 2007, spearheaded by the hit single "This Ain't a Scene, It's an Arms Race." The album continued Fall Out Boy's streak, debuting at number one on the Billboard charts and going platinum one month later. Released in early 2008, the CD/DVD package Live in Phoenix documented the band's strength as a flashy live act, while the full-length studio effort Folie à Deux followed later that year.

Recording sessions for Folie à Deux were tough, prompting the band to take an open-ended hiatus soon after the album's release. Joe Trohman and Andy Hurley joined a new band, Damned Things, during the interim, while Wentz teamed up with a new vocalist, Bebe Rexha, to form Black Cards. Stump took the opportunity to launch a solo career, ditching his band's emo pop music in favour of a more electronic, R&B-influenced sound.

Stump released his debut solo album Soul Punk in 2011 and, despite some positive reviews, the album didn't catch fire. Pete Wentz spent time with a new band called Black Cards, but that also didn't really go anywhere, and it wasn't long before rumours of a Fall Out Boy reunion began to swirl. In February 2013, the band confirmed that the rumours were true: they had reunited for a new album called Save Rock and Rolland an accompanying tour. Preceded by the single "My Songs Know What You Did in the Dark (Light 'Em Up)," Save Rock and Roll was released in April of 2013 and promptly debuted at number one on the U.S. charts. The band kept busy as well during the subsequent year, creating a video for each song on the album, recording the punk-inspired EP Pax-Am Days (with production from Ryan Adams), and headlining tours that reached America, Europe, and Australia.

In late 2014, Fall Out Boy premiered a new single, "Centuries," the first glimpse of their sixth album, American Beauty/American Psycho. Produced in part by J.R. Rotem and SebastiAn, it combined Fall Out Boy's core punk-pop sound with elements of electronica, R&B, and hip-hop. The album debuted at number one when it was released the following January and it stayed on the charts thanks to the Munsters-sampling single "Uma Thurman," which was certified platinum. Fall Out Boy released a remix version of the album called Make America Psycho Again in October 2015. In April 2017, the band revealed that their forthcoming seventh album, Mania, would be released later that year. The announcement was accompanied by the album's first single, "Young and Menace." Show more

Paramore Tickets | Panic! At The Disco Tickets | You Me At Six Tickets | Imagine Dragons Tickets