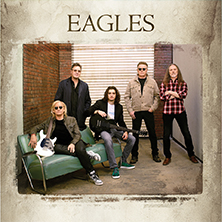 The Eagles, a seminal and influential American rock band, formed in 1971 and went on to become one of the most successful bands of that decade, with six albums reaching number one and five singles doing the same. The band broke up in 1980, reformed in 1994 and released album Hell Freezes Over. Since then they have performed live sporadically. Long Road Out of Eden, their first studio album since 1979, came out in 2007 and was supported by an extensive tour the following year. The Eagles album Hotel California featured 37th by Rolling Stone Magazine in their Greatest Albums of All Time poll.
Eventim is the place to look for The Eagles tickets and tour dates. Sign up to The Eagles Ticket Alarm to be notified of future The Eagles concerts and tours. Show more

You bought tickets for Eagles but don't have time to go? No problem: with fanSALE you can simply, quickly and securely sell your admission tickets through Eventim's online ticket market. In this way, you can sell your tickets legally and respectably to true fans, even for sold-out events. Sell tickets