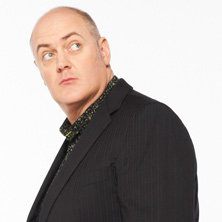 Dara O’Briain is an Irish comedian and presenter best known for hosting ‘Mock The Week’.

He is also a regular guest on shows such as ‘QI’ and ‘Have I Got News For You’ and has also appeared on the iconic ‘Live at the Apollo’ numerous times.

As well as presenting, Dara is one of the country’s best loved comedians and his stand-up shows are known for its witty and daring audience interaction as well as intelligent wit.

In 2018 Dara returns to the stage with his first live show in three years, ‘Voice Of Reason’.

Eventim is the place to look for Dara O'Briain tickets and tour dates.

To be the first to hear when more Dara O'Briain tickets go on sale you can sign up to the Eventim Ticket Alarm below.

Eventim is also on Facebook, Twitter & Instagram! Connect for all the info on Dara O'Briain plus the latest concerts & festival line-up information, travel details and loads more! Show more

You bought tickets for Dara O'Briain but don't have time to go? No problem: with fanSALE you can simply, quickly and securely sell your admission tickets through Eventim's online ticket market. In this way, you can sell your tickets legally and respectably to true fans, even for sold-out events. Sell tickets

Dara O Briain started out his television career on a kids TV show in Ireland, a job he is more than happy to forget.

Years spent doing the circuit in Ireland eventually led him to Britain where his career really kicked off. His live performances grew in popularity and in 2003 he was nominated at the Chortle Comedy Awards for Live Comedy in the categories Best Compere and Best Headline Act (which he would go on to win). In 2004 he won the Best Headliner award again, as well as being nominated for Best Full-length Show.

The Irish comic is a regular at comedy festivals and his 2005 appearance at the Edinburgh Fringe was his eighth consecutive performance there. It also proved to be the biggest selling event at the festival.

Having already made himself a household name in Ireland due to his various television roles, Dara has been a regular on television's top stand-up showcases and panel shows, including as a regular stand in host of BBC1's satirical flagship Have I Got News For You hosting it a record 4 times, Friday Night with Jonathan Ross, QI, Parkinson, Never Mind The Buzzcocks, The Stand-up Show, and The Empire Laughs Back, Room 101 (where he got rid of children's television, banter, Gillian McKeith - from C4's You Are What You Eat - and magicians.)

He had a spell as the host and compere for Live At The Apollo and currently presents Mock The Week, another satirical panel show (bit of a mix between Whose line... and Have I Got News...) which is now in it's sixth series and still proving to be extremely popular.

Other notable television work includes hosting the BBC sitcom writing competition Last Laugh, and two documentaries which re-created the British comedy novel Three Men in a Boat. For this, OBriain rowed up the River Thames with Griff Rhys Jones and Rory McGrath. A sequel, Three Men in another Boat, in which they raced from the Tower Bridge to the Isle of Wight, was first aired in December 2007.

Dara has embarked upon four tours, including 2006's 66 date sell-out tour of the UK and Ireland, and his latest tour, Dara OBriain Talks Funny finished in summer 2008 and has seen the release of his second live DVD in November of the same year. OBriain also won Chortle's "Best Theatre Tour" award in 2008.

A big man with a big personality, who exudes warmth and spontaneous good humour, Dara is a delight to be entertained by.