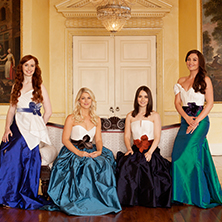 5.0 stars, from 2 fan reports on www.eventim.co.uk
Celtic Woman is a musical group from Dublin, Ireland comprising five irish women with a repertoire that ranges from traditional Celtic tunes to modern songs.

They are one of the biggest selling world music acts on the planet and are constantly touring their music to adoring crowds in all corners of the earth. Celtic Woman offer a truly unique and stirring live experience.

Eventim is the place to find Celtic Woman tickets and tour dates.

To be the first to hear when more Celtic Woman tickets go on sale you can sign up to the Eventim Ticket Alarm below.

You can also find us on Facebook, Twitter & Google+. Connect with us for all the latest on Celtic Woman plus new concerts & festival line-up information, travel details and loads more. Show more

You bought tickets for Celtic Woman but don't have time to go? No problem: with fanSALE you can simply, quickly and securely sell your admission tickets through Eventim's online ticket market. In this way, you can sell your tickets legally and respectably to true fans, even for sold-out events. Sell tickets

In 2004, he recruited five Irish female musicians who had not previously performed together: vocalists Chloë Agnew, Órla Fallon, Lisa Kelly and Méav Ní Mhaolchatha, and fiddler Máiréad Nesbitt, and shaped them into the first lineup of the group that he named Celtic Woman.

Downes chose a repertoire that ranged from traditional Celtic tunes to modern songs. The group's lineup has changed over the years; in 2009, the group consisted of Chloë Agnew, Lynn Hilary, Lisa Kelly, Alex Sharpe and fiddler Máiréad Nesbitt; Alex Sharpe left the group in May 2010.

The group has undertaken a number of world tours. Cumulatively, albums by Celtic Woman have sold over 6 million records worldwide.The Celtic Women are all of Celtic origin. The foundation for Celtic music's popularity outside Ireland and Europe was built by tapping into the success of artists such as Enya and Clannad, along with stage shows Riverdance and Lord of the Dance. Celtic Woman has been described as being "Riverdance for the voice." Show more